Our plan to a tight flange

Absolutely tight flanges are feasible – if their screwing is based on a concept. In addition to high-quality and calibrated tools, a leak test, training of fitters, high-quality lubricants and other aids are part of the concept. If the concept modules interlock, the flange remains tight. 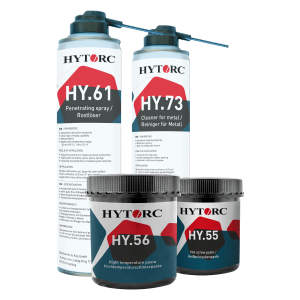 HYTORC offers expert advice and optimal service also on the subject of lubricants and application. 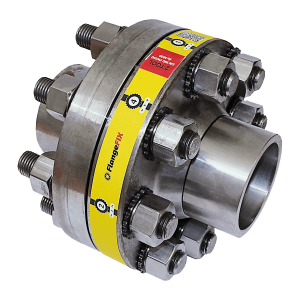 Practical and ingeniously simple: A patent-pending tape that can be placed around flange connections and that indicates the correct order of the parts to be screwed together with the specified numbering. The flangeFIX marking system developed by HYTORC is put around the flange by the user in a matter of seconds. The numbering to identify the tightening sequence ensures that the strap guarantees fast and secure screwing and documentation in accordance with national and international regulations.

Free of reaction arms, free of counter keys thanks to non-rotating washers. 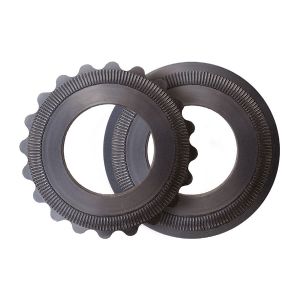 The zWasher is a non-rotating washer that serves as an axial support element and at the same time ensures a defined coefficient of friction. Its design is chosen so that all standard screws can be clamped axially. The BackUp Washer ensures that the lock nuts no longer turn. 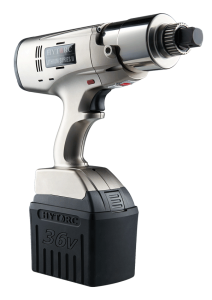 HYTORC has completely redeveloped the electric torque-angle wrench with the Lithium Series II. The Lithium Series II convinces with expanded functionality, more stability and more intuitive operation – especially for screw connections with high demands in machine and vehicle construction as well as in the energy and chemical industries.

Compatible with the CLAMP expansion nut and the washer system. 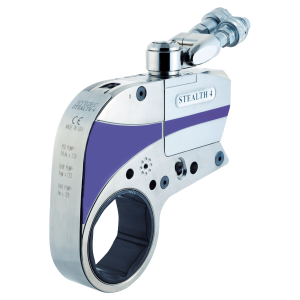 With simultaneous documentation, the VECTOR controls each individual wrench individually and switches off when all the hydraulic wrenches connected there have reached the desired torque.

Today, more than 90% of all screw connections are pre-tensioned. Torque-controlled tightening is by far the most frequently used method. In addition, the torque-angle-controlled as well as the yield point-controlled tightening process is becoming increasingly established. Today, designers are using better and better methods to calculate the minimum prestressing force required for a screw connection. HYTORC has developed the appropriate processes to meet the increased requirements. We briefly present the most important and most common processes here. 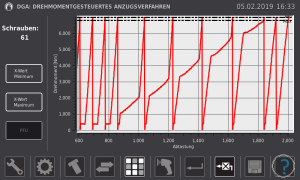 With the hydraulic, torque-controlled tightening method, the torque wrench stops when a previously set torque is reached or signals that it has reached the torque. Knowledge of friction is very important in this process. Both the lubricant and the quality of the components and their surfaces influence the friction behavior. In order not to add torque inaccuracies to the spread of friction, HYTORC has developed particularly precise torque wrenches. The change in the tightening torque in hydraulic torque screwdrivers results primarily from the change in the lever arm during the tightening process.

Since the tightening torque increases directly with increasing hydraulic pressure, the screw connection is preloaded in stages. The entire tightening process for each screw can be documented with the Eco2TOUCH.

With the DISC, zWasher, CLAMP expansion nut, SmartSTUD and JustBOLT connecting elements, even axial, side load-free tightening with a preload accuracy of ± 5% is possible.

The torque-controlled tightening process is suitable for all screw connections up to torques of around 200,000 Nm. Suitable lubricants should be provided based on the torque calculations to prevent rubbing or “seizing”. When used on flange connections, it must be used as a SIMULTORC mounting system with non-rotating washers to prevent damage to the flange contact surfaces. 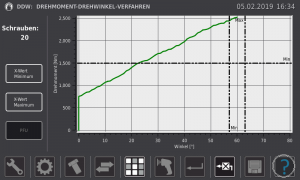 The hydraulic, torque-angle controlled tightening process indirectly measures the elongation of the screw. A defined change in length of the screw connection can also be assigned via the thread pitch. Both the compression deformations within the clamped parts and the elastic and plastic deformations occurring in the parting surfaces up to the full-surface contact are measured.

However, this measurement can only be used to determine the preload force if the angle of rotation is actually converted into a change in length of the screw connection. For this reason, it must be ensured that all the joints with a defined joining torque lie exactly on top of each other before the angle measurement and that the components to be clamped can absorb the required surface pressures. Precise calculations are essential here.

The hydraulic torque-angle-controlled tightening process developed by HYTORC not only monitors the joining torque and the angle of rotation, but also the final torque. Only when the required angle of rotation and the final torque are in the specified parameter window, the system evaluates the tightening process as correctly completed. A further increase in accuracy is achieved if the screw connection is tightened into the over-elastic range.

All process parameters are checked, documented and archived by the Eco2TOUCH controller. This tightening method is particularly suitable for screw connections with short clamping lengths and in the manufacturing process / production lines. It is only to be used where screw connections according to ISO4014, ISO4017 and ISO4762 are screwed into threaded holes (blind holes). In addition, suitable lubricants must be provided to prevent rubbing or “seizing”. 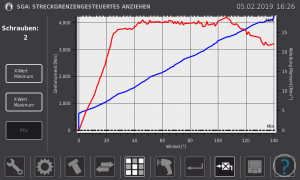 Here one takes advantage of the fact that when tightening screw connections by mutually twisting the nut and screw bolt not only an axial tension but also a torsional tension due to the thread friction is stressed. The bolt begins to flow where the comparative stress from tension and torsion reaches the material yield point. Immediately after pretensioning, the torsion part springs back by approx. 50% in the screw bolt.

As a result, the comparative stress drops when the pretensioning force remains, and the prestressed connection controlled by the yield point regains an elastic connection reserve. The over-elastic tightening of screw connections with the help of assembly processes that exceed the yield point (tightening point and angle of rotation controlled tightening) is increasingly being used successfully. It allows optimal use of the screw when tightening and leads to the maximum possible assembly pre-tension.

The service life of the connection is not affected, but is even significantly improved:

In the event of subsequent vibration loading at a pre-tensioning force level below the yield point, even higher durability values ​​can be achieved for the screw connection due to more favorable load distribution and possible load-indicated residual compressive stresses. This applies to both rolled and tempered screws.

The hydraulic, yield point-controlled tightening process is an over-elastic tightening process in which the start of the screw flow serves as a control variable for the amount of preload. Regardless of the under-head friction, the screw is tightened until the yield point is exceeded as a result of the tensile and torsional stress. As with the hydraulic, torque-angle-controlled tightening process, the components must be preloaded to an angle starting torque. When the screw connection is tightened further, the torque and angle of rotation are continuously measured and the gradient is calculated.

The measuring technology used recognizes the end of the elastic range and ends the screwing process if the gradient change is previously defined. Since the screw is only plastically deformed to a very small extent, screw connections with short clamping lengths can also be tightened in accordance with the yield point. During the tightening process, all process parameters are checked, documented and archived by the Eco2TOUCH control. The plastic extension that the screw connection undergoes during assembly is very slight, so that the reusability of the screw connections tightened by the yield point is hardly impaired. The screw hardness, the joining torque and the switch-off criteria should be adapted to the respective screw connection.

This tightening method is also particularly suitable for screw connections with short clamping lengths and when using screw systems on construction sites. Screw connections that have been tightened hydraulically according to the yield point can in principle be reused. However, suitable lubricants must be provided to prevent rubbing or “seizing”.

VDI2230 tightening factor: not applicable!
Because screw connections on the SGA cannot be torn off. See remark VDI-2230 – Nov. 2015 table A8. 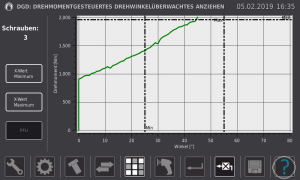 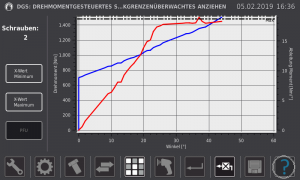 In this assembly process, the control value is the target torque and the linear gradient is the control variable at the end of the process. The process is stopped when there is a deviation from the linear curve due to the detection of the yield point. This means that the screw no longer breaks. 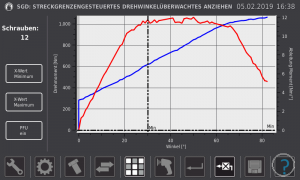 In this assembly process, the control value, the target torque and the linear gradient as well as the angle of rotation achieved are the control variable at the end of the process. 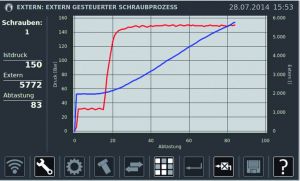 In this assembly process there is the control value setpoint torque and any other external physical measurement parameter. This is continuously measured via the current or voltage interface and graphically output and documented in its physical unit.

This analysis module determines the further rotation angle of a screw from a defined joining torque until the defined target torque is reached. In this assembly process, the control variable is the target torque.

Sequencer chaining of all assembly methods mentioned in any order

In this module, all available assembly methods can be put together in any order. In the standard version “without external sensors”, the category classification must be made according to the type of linkage.

Statistical evaluation of the measured process parameters. It can also be used as a measuring device for PFU (process capability analysis)

This website uses cookies to improve your experience while you navigate through the website. Out of these cookies, the cookies that are categorized as necessary are stored on your browser as they are essential for the working of basic functionalities of the website. We also use third-party cookies that help us analyze and understand how you use this website. These cookies will be stored in your browser only with your consent. You also have the option to opt-out of these cookies. But opting out of some of these cookies may have an effect on your browsing experience.
Necessary Always Enabled
Necessary cookies are absolutely essential for the website to function properly. This category only includes cookies that ensures basic functionalities and security features of the website. These cookies do not store any personal information.
Non-necessary
Any cookies that may not be particularly necessary for the website to function and is used specifically to collect user personal data via analytics, ads, other embedded contents are termed as non-necessary cookies. It is mandatory to procure user consent prior to running these cookies on your website.
SAVE & ACCEPT